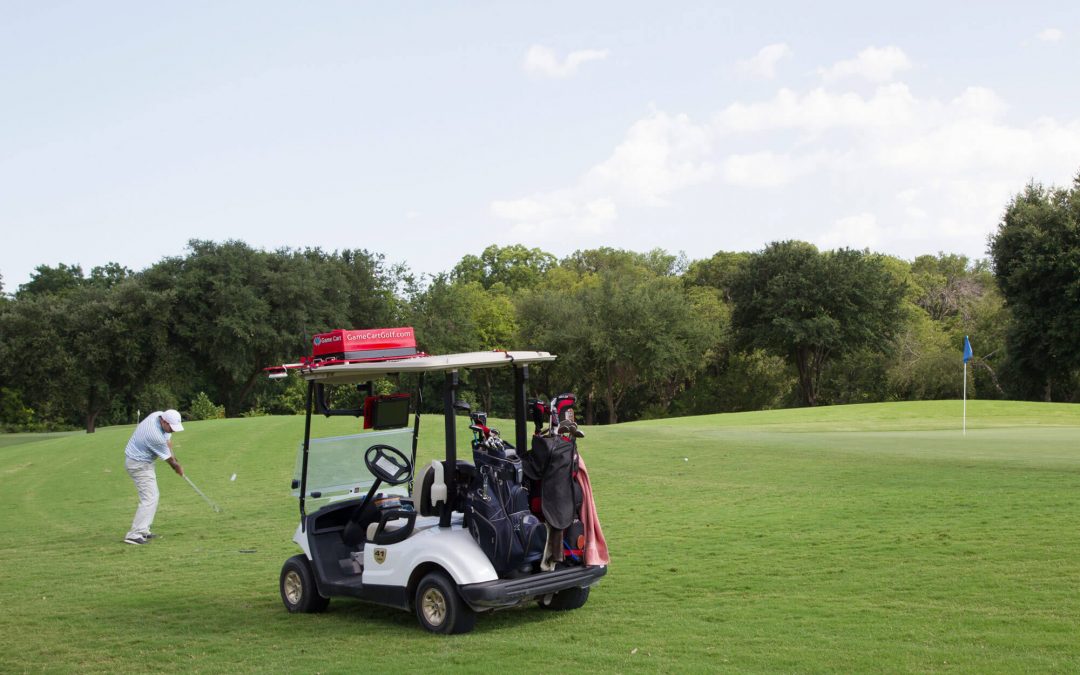 A Dallas startup is aiming to make the game of golf more appealing to consumers via its patent-pending technology that adds video gaming, fantasy gaming and social media elements to the sport.

World Class Creations has developed Game Cart Golf, a technology system that uses video to allow golfers to compete with other players who may not be present.

“The golf industry is ripe for new innovation,” said Peter Bastawros, founder and CEO of World Class Creations. “There’s a heavy decline in the industry, and we feel its because its not relevant for a younger audience.”

So Bastawros and his team have spent roughly the last three years developing technology that could make golf more interactive and high-tech by allowing players to compete against golfers’ archived games in real-time. The company, founded in 2013 and based at the Dallas Entrepreneur Center, expects to receive its first patent next week.

Here’s a look at what it has developed.

How does Game Cart Golf work?

What’s happening is your playing against pre-recorded games. The system has a tablet mounted on where a rearview mirror on the (golf) cart would be. As you’re playing, you can refer to it up there. Two of the key things that are core to this are the pace of play and automation. You just play your game and it follows along with you. It has spatial awareness and knows where you are. There’s a chip, that you can put on your hat on your shirt that works as a remote. It receives the GPS location, which is signaled over to the golf cart. One of the bigger functions is it records video of the player. As long as you can see the golf cart, one of the cameras will find you. There are two cameras … one goes to the player and one goes to the pin (hole). The video is recorded on each unit. The video is uploaded to YouTube and tied back to our database, which connects it together. The social media element is you get this information and can share it. (Players) can blast off their hole in one to Facebook or Twitter.

How are you funded?

It’s all self-funded. I’m the director of technology for an oil and gas company based in Dallas. I’ve put in close to quarter of a million dollars. It’s well into the millions when you count development hours.

How do you make money?

We’re trying to assess our business model and revenue implementation. We’re working with courses to structure the pricing. The question is are we going to outright sell the product and have a maintenance agreement or will we have a rental process? Were hoping to launch a revenue test by the end of this season or beginning of next season to understand price point. We’re looking at generating revenue in Q2 of next year.

Who are your customers?

What does your pending patent cover?

The patent covers the method and utility of this technology. It includes software and hardware, but It’s really about the utility around it.

Who are your competitors?

TopGolf connected a driving range, added more entertainment and tech and proved success. We’re expanding connected golf to the golf course. They’re a complementer to what we’re trying to do. Other competitors are smart phone apps. They accomplish a single task by they’re not automated. There’s no one that has taken this comprehensive approach.

We’re working on getting the minimal viable product out there and getting more feedback from the users and golf courses. We’re getting to a comfortable point where we can leverage social to bring in new players. That way we can iterate it from MVP to commercial product. The final product will replace the canopy and be more appealing to the eyes.